Our Node-Based Quest Editor for Fireside

After Paul told you in our last devlog about the procedural generation of our game world and how it barely fits in our small scope for Fireside, I will tell you today about the other feature that barely fits.

Fireside is a heavily narrative driven game and we decided in the first meeting after the Stay Safe Jam, that we need a quest and dialog system which can handle those complex narratives. Our designers went and created a rough feature list for the system: A quest should be able to span multiple bonfires, have multiple characters, react to player input (dialog decisions, item trades etc.) and conditions (travelled distance, item possession). With these requirements in mind I started playing around with scriptable objects in Unity and a system to parse the data in those objects to manage the quest flow during runtime. 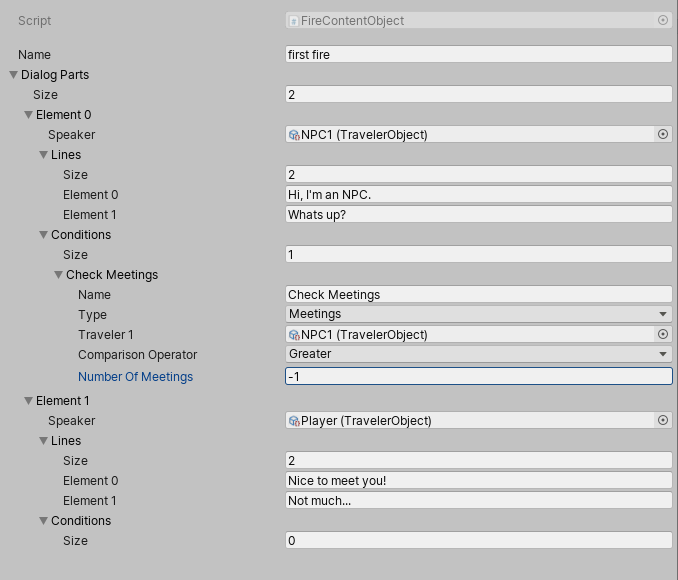 I realised quite quickly that scriptable objects are – as expected – a good way to store the quest data, but that there is no way to edit this data without a specialized editor. I had followed the development of the Unity UIElements system and the node editor loosely and thought, this is a great opportunity to look deeper into this subject! I quickly found the three-part Tutorial “Unity Dialogue Graph Tutorial” jumped through it and thought …

this is great, BUT…

midway into the tutorial I noticed that the documentation from Unity is virtually non existent. In addition there aren’t many resources on this topic, because the API is – and will be for the future – experimental. It is mostly for internal use like shader graph and the visual effect graph. But I had to try it out, because the result looked so nice and powerful.

Shout-out to Mert Kirimgeri and his tutorial that allowed me to start with this API. I changed a lot of his architecture, but the videos are a great resource. I try to highlight parts of my system that are important and/or are not contained in the video.

You can find a video of the editor in action on our twitter feed.

The UIElement system is advertised to work like HTML – and it kind of does –  but the markup for the UI is created by your code during runtime. So, you create a container (<div>) and add a new text field (<input>) and add the whole container to your parent object for example a node (<body>). Later you can use USS (CSS) to style your UI.

Not only the basic UI works like this but also the node graph:

But the basic node doesn’t contain anything. To change that, you can either add it after creation or create a class that inherits from Node. I created a BaseNode class that handles the standard creation process in the constructor, like the position, title and an input and output port. Every other node type inherits from it and expands the constructor. I used a similar system for the ports and created a CustomPort class that wraps the port creation process.

This node stores all dialog lines from one character that will be displayed after one another without interruptions from other characters, when the quest flow reaches the nodes input port. Therefore, the node contains a list of text fields (that store a line each), a button to create new fields, and a button to remove each field. To specify which character is saying those lines, I added an additional input port for a character node.

To manage those characters, I decided to use the exposed property / blackboard system from the Node graph. Each character in the quest is an exposed property in the blackboard (the player, narrator and every other NPC). If the designer adds a character object, then the data from this object is used during runtime for each port where this property is connected to. When no object is specified the system generates a new character for this property, which will be permanent for this quest. The designer can create many nodes of a property with the big plus button, but each one will reference the same object. This works the same way for items. 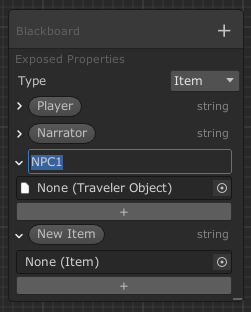 Groups are a useful feature for a complex editor, but the documentation is especially lacking. A group can be created like any other node and works like you would expect it out of the box. Except you can’t remove anything from the group! To fix this, I added a toolbar to the headerContainer.contentContainer of the group with a remove selection button.

Saving and loading is obviously very important and can be quite complex, which is why you should incorporate it in your design from the start. I decided that the editor saves scriptable objects that can also be parsed by the game at runtime. Since Unity does not allow to have a reference in a scriptable object to the same type, the system uses GUIDs to identify and reference nodes and ports.

The first step of the saving process is to get the list of all nodes and start a recursive function with the entry node of the graph. The recursive function removes the node from the list, saves its content, and checks all edges connected to the ports of the node. If the newly discovered node is still part of the list, the recursion jumps to this node, if not, the node was already saved. Either way the GUID of the connected node is added to a list for this port and the edge is added to a list of all edges. After the recursion has returned all nodes connected in any way to the entry node are saved. The recursion is started again with the first node of the list until it is empty.

To load the quest again, all nodes are created at their old position with their ports and content. In the second phase all edges and nodes are connected based on their GUID references. For the parsing of the quest at runtime the GUID reference of each port is used, to reduce the GUID based searches that would be necessary with the edge list. 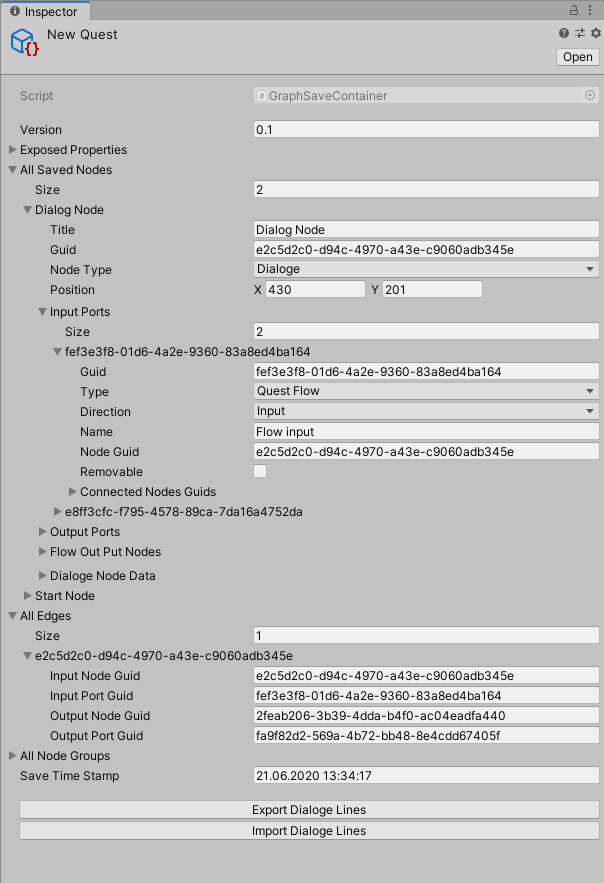 To allow for simple spell checking of the dialog lines by non-team members, I created a CSV export feature. For the export the content of each dialog node and its GUID is saved to a CSV with the save-timestamp of the quest. Then the user can load it in excel and change, add or remove lines but not change the layout of the node graph. On Import the GUIDs are matched back to the saved nodes and the lines are copied back. If the timestamps of the CSV and the quest don’t match, the user gets a warning and can choose to ignore it. This should help to avoid accidents that would corrupt the quest (git should be the safety net for everything else). 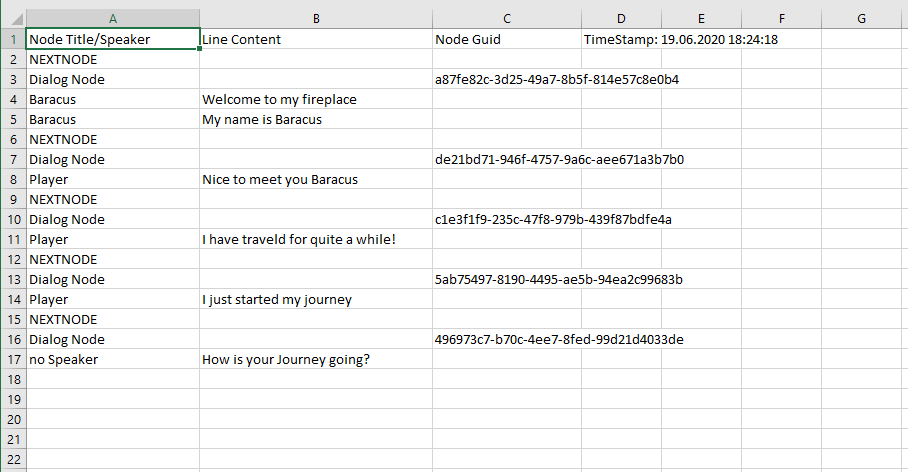 This system could also be expanded to handle translations for different languages, but since our scope is big enough already, we stick with English.

Two things you should note before you jump into Unity and start coding:

What do you think about an editor like this? Would you want to use it as a designer or structure it differently as a programmer? Tell us in the comments below.

If you want to follow the development of Fireside you should check out our last devlog from Paul about procedural level generation and check out our development streams every Thursday from 10:00 AM to 12:00 AM CET at twitch.tv/emergoentertainment.

There is more to this topic than we could ever fit in a single devlog. We will share more in the future, so stay tuned and follow us here on itch.io and join our discord server.

A wholesome indie game about the breaks on the journey.